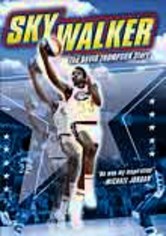 2005 NR 0h 44m DVD
Basketball legend David Thompson earned four trips to the NBA All-Star Game and the nickname "Skywalker," due to his astonishing 44-inch jump that allows him to get the ball far above the rim. This documentary looks at the life of the man who served as an inspiration to many, including the NBA's most famous alum, Michael Jordan. Learn about Thompson through interviews with Jordan, Bill Walton, Dennis Johnson, Norm Sloan, Dr. J and more.