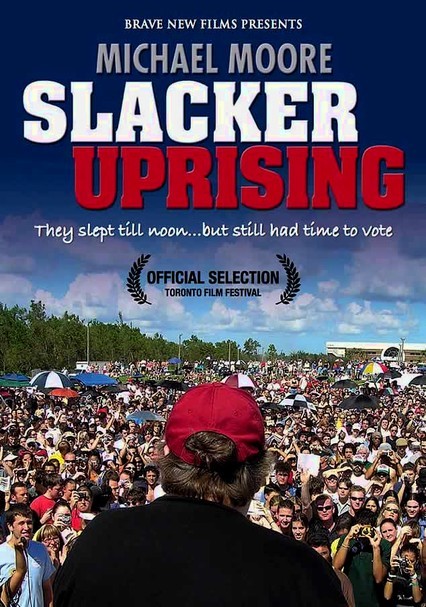 2007 NR 1h 37m DVD
Michael Moore's documentary captures the excitement of his 2004 Slacker Uprising Tour, in which he visited 62 cities, hoping to mobilize swing state "slackers" to get up, get out and cast their first votes in a presidential election. With the promise of free Ramen noodles and no politicians, thousands of young people showed up each night to listen to Moore, along with entertainers such as R.E.M., Eddie Vedder and Viggo Mortensen.

Parents need to know that this documentary -- which chronicles Michael Moore's 62-city, 20-state tour of "swing states" to get out the vote in favor of John Kerry for the 2004 election -- is a lengthy harangue against George W. Bush, the Iraq War, and the Republican Party. The political discussion is constant throughout -- issues from health care to Iraq are mentioned, as are the First Amendment, partisan politics, and the controversy over the Supreme Court's decision in the 2000 election. The level of discourse may be heated, but it's mostly civil, albeit one-sided. There's some strong language (including "f--k"), though it's not frequent.

Discussion of the war in Iraq, 9-11, and the Kent State shootings.

The entire film is a chronicle of pro-Democratic political advocacy; there's extensive discussion of electoral politics and strategy and of "getting out" the "50% who don't vote." Moore is accused of bribery for offering noodles and clean underwear to entice non-voters to register and vote. Also includes discussions of the war in Iraq, the Patriot Act, the First Amendment, Army and National Guard casualties, health care, national security, the Kent State shootings, the Supreme Court decision on the 2000 elections, and more.

Many news organization logos are visible in footage used in the movie; Ramen Noodles, Hanes underwear, and Fruit of the Loom underwear are visible; Moore's books and films are thrust toward him by autograph seekers. Many universities (the sites of Moore's tour dates) are named. Mentions of brands like Tostitos, Fox News, the National Rifle Association, In and Out, The Lord of the Rings films, and more.