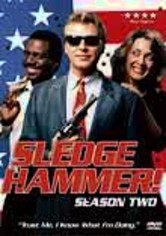 1987 NR 4 discs
Rebel cop Sledge Hammer (David Rasche) is back for a second season of this brilliantly hilarious comedic series that pokes fun at, and draws inspiration from, the shows that graced the big and small screens in the over-the-top decade of the 1980s. The cast pays homage -- sort of, anyway -- to Alfred Hitchcock, Bela Lugosi and Humphrey Bogart, and to popular movie genres such as 1940s noir and traditional horror movies.