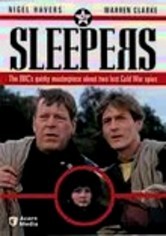 1991 NR 2 discs
With the Cold War drawing to a close, the Kremlin decides it's time to call home Soviet agents Jeremy Coward (Nigel Havers) and Albert Robinson (Warren Clarke), who've worked undercover in England for the past 20 years. The Anglicized operatives, however, have no desire to return. Dispatching a beautiful female agent as bait, the Soviets set the stage for a procession of double crosses, conspiracies and blunders in this comic British miniseries.