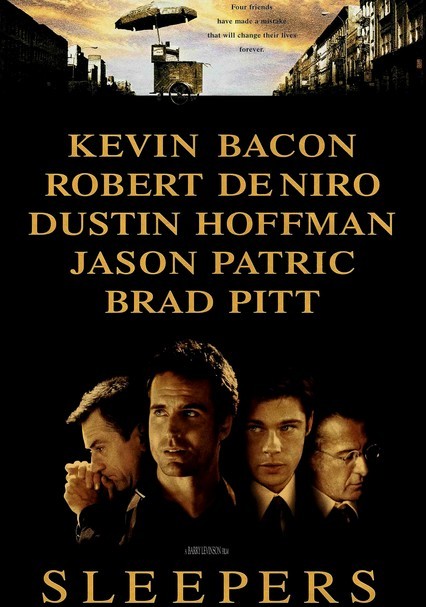 1996 R 2h 28m Blu-ray / DVD
In this drama based on characters in Lorenzo Carcaterra's controversial book, four boys from Hell's Kitchen enter a reformatory where a cruel guard (Kevin Bacon) abuses them. Years later, two of them avenge their tormenter and stand trial, defended by a druggie lawyer (Dustin Hoffman) and aided by their scheming cohort (Brad Pitt) and other friends from the 'hood (Robert DeNiro, Minnie Driver), who face the moral dilemma of justice vs. loyalty.

Parents need to know that this movie deals with the sexual, physical and emotional abuse of children. Characters drink, smoke, do drugs, steal, have sex, rape children, commit murder, beat one another, and engage in other illegal activities including selling drugs and bribing police officers. Domestic abuse also figures significantly in the film. The main character's Catholic upbringing also figures largely in the plot, and morality in the film is extremely complex. Younger viewers will likely be confused by the concept of right and wrong as presented in the film. And the film is not easy viewing -- particularly for anyone who has endured abuse of any kind.

The scenes dealing with sex in this film are very disturbing, as they address the sexual abuse and rape of children.

There are several homicides two of them are justified in the context of the film.

Revenge is a theme throughout the film.

Characters drink and smoke, and a few have drug problems. However, these are acknowledged as debilitating, and several of the characters die as a result.