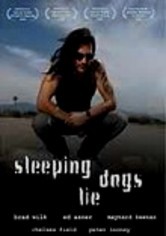 2005 NR 0h 30m DVD
Rage Against the Machine drummer Brad Wilk stars as an Ohio man who begins receiving disturbing middle-of-the-night phone calls in this suspenseful short film from writer Chumahan Bowen and director Stuart Lessner. The mysterious calls eventually lead the man to travel to a tiny Texas town to find help. There, he enlists the aid of an unfriendly sheriff (Edward Asner) and his deputy (Tool lead singer Maynard James Keenan) to solve the mystery.