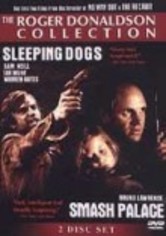 1977 NR 1h 47m DVD
Recluse Smith (Sam Neill) becomes entangled in a revolutionary struggle between guerillas and right-wingers in New Zealand. Implicated in a murder and framed as a traitor, Smith tries to remain a pacifist in an increasingly untenable situation. Special features include a documentary on director Roger Donaldson. This video is part of a collection devoted to Donaldson's work; the other video features his film Smash Palace.