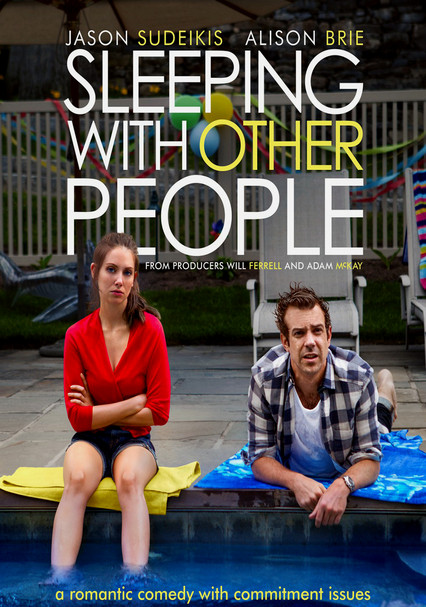 2015 R 1h 41m Blu-ray / DVD
Jake (Jason Sudeikis) and Lainey (Alison Brie) impulsively lose their virginity to each other in college. When their paths cross twelve years later in New York City, they realize they both have become serial cheaters. Bonding over their chronic commitment issues, they form a platonic friendship to support each other in their quests for healthy romantic relationships.

Parents need to know that Sleeping with Other People is a romcom that's heavy on sexual content. It centers on a man (Jason Sudeikis) and a woman (Alison Brie) who struggle with monogamy and end up becoming platonic friends, even though they're very open about their mutual attraction. Characters talk a lot about sex, and there are several long, suggestive sex scenes -- and plenty of women in their underwear -- but no actual graphic nudity. Expect frequent swearing (especially "f--k," "s--t," and "d--k"), and scenes in which characters drink, smoke cigarettes, and -- in one long sequence -- take Ecstasy while at a child's birthday party.

The whole plot revolves around serial infidelity (and ultimately breaking that pattern). The main characters agree not to sleep together, despite their obvious attraction, but both engage in plenty of sex with others; several scenes show them in bed (and other locations), moving, grunting, and eventually falling down exhausted. Several woman are seen in their underwear, but no graphic nudity is shown. Several graphic verbal descriptions of various sexual activities. While high, a character takes off her shirt, revealing a red bikini top, and tries to get children to join her in an uninhibited dance.

A fist fight involves punches, wrestling, and grappling on the ground; the fighters end up with disheveled clothes and a bloody nose, respectively.

Sex is easy, but love requires commitment and a willingness to be vulnerable. Taking the time to develop a real relationship can help you form a deep connection.

A newly rich character talks about buying a Tesla. A person who's moving to another city loads her stuff in a U-Haul truck .