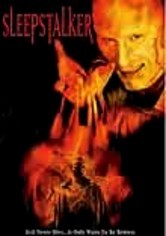 1995 R 1h 38m DVD
As a youngster, Griffin (Jay Underwood) saw his parents brutally murdered by a sadistic serial killer named The Sandman. Justice was served when the captured killer was convicted and executed for his heinous crimes. But now, freed from his mortal coil, The Sandman has returned to mete out vengeance in the guise of The Sleepstalker. And that doesn't bode well for Griffin. This waking nightmare isn't confined to Elm Street!