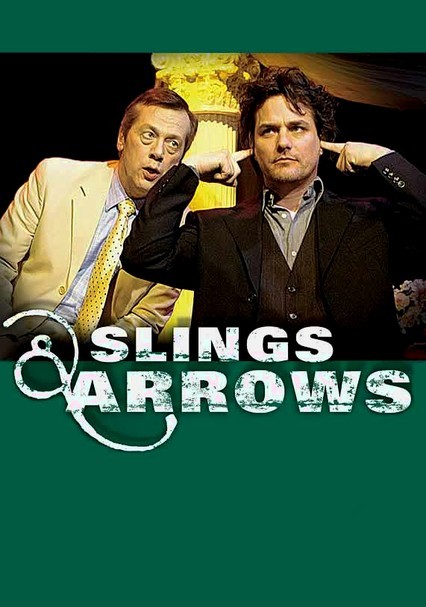 2003 NR 3 seasons
Washed-up actor Geoffrey Tennant's failing attempts to run the Shakespearean New Burbage Festival are rescued by his brilliant mentor, who happens to be a ghost. While staging the Bard's plays, Tennant wrangles fussy actors and demanding sponsors.

Struggling to run a Shakespeare festival, actor Geoffrey Tennant gets valuable assistance from an unusual source: the ghost of his beloved mentor. But a hostile leading lady and a slightly dim male star stand in their way.

Tempests, hexes and ghosts stymie actor turned director Geoffrey Tennant as he tries to keep his productions afloat. He's got his hands full with the "Macbeth" curse and an onstage romance that continues after the curtain falls.

With ghostly mentor Oliver Welles nowhere to be found, Geoffrey coaxes his childhood hero out of retirement to play the title role in "King Lear" and finds an ingenue to play the role of young Cordelia.

Parents need to know that this intelligent, creative Canadian ensemble comedy series is definitely intended for adults. Characters swear, drink, and use drugs, and there's brief partial male nudity (buttocks) and some strong -- albeit funny -- simulated sex scenes. The sophisticated writing and focus on classic Shakespearean theater probably isn't for a lot of teens, but those who've been in plays or taken drama classes may enjoy the mix of behind-the-scenes humor and contemporary comedy.

Occasional slapping. While meant to be funny, on at least one occasion it results in a bloody lip. Some characters are seen dueling with swords, but this is more comedic than violent.

The show emphasizes the beauty and value of Shakespeare, as well as the tension that emerges between the theater as an art form and as a business. The characters are eccentric and flawed, but they're not bad people. Cast is primarily Caucasian, but some secondary actors are African and Asian. Several characters are homosexual.

Highlights various works of Shakespeare and makes references to various plays and musicals shown both in Canada and on Broadway, including "Mama Mia."

Frequent consumption of cigarettes and alcohol. Consumption of marijuana is referenced and occasionally visible. Characters sometimes get very drunk or high.