Slippin': Ten Years with the Bloods 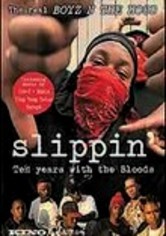 Slippin': Ten Years with the Bloods

2005 NR 1h 24m DVD
After the 1992 Los Angeles riots, filmmakers Tommy Sowards and Joachim Schroeder spent the next decade documenting the lives of five Blood gangstas, capturing the raw realities, deadly rivalries and tragedies of South Central's gang scene. As K.K., Jumbo, Dig Dug, C.K. and Low Down try to survive and conquer the mean streets, they find themselves locked in a violent, eye-for-an-eye turf war against their sworn enemies, the Crips.