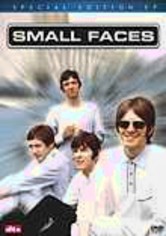 2003 NR 1h 10m DVD
The legendary mod band The Small Faces formed in 1967 and took the UK by storm for a couple years with several chart-topping hits. This "extended play" video captures them performing several hits live in concert at various times and locations. Also included is a jukebox feature, which lets the viewer select audio-video samples by other artists.