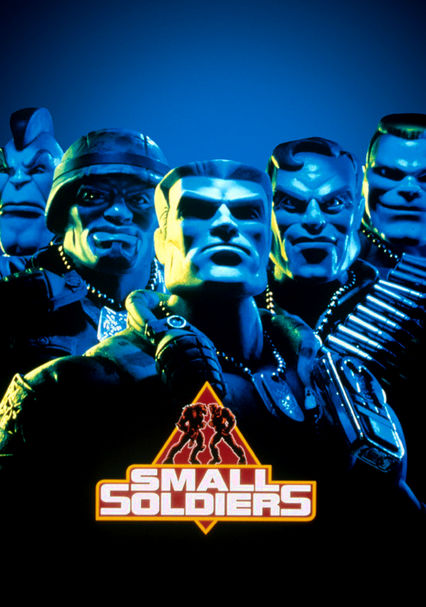 1998 PG-13 1h 50m DVD
The Commando Elite are toy action figures programmed to annihilate another toy group, the Gorgonites. But before the Elite have been tested, the son of a toy store owner opens them, causing the Elite to attack the children playing with them.

Parents need to know that Small Soldiers is a 1998 movie in which soldier toys powered by advanced military technology come to life and wreak havoc on anyone they consider to be their enemy. The "soldiers" of the title are ruthless killing machines in the body of dolls who attack everyone around them with every means at their disposal, which means taking common household objects and garage tools and converting them into weaponry, such as nail guns, pointed nail files, flaming tennis balls. There is some peril: teens and an older man are tied up by the toys, and one is held hostage, and a boy hanging from an electrical pole could either fall to his death or die of electrocution. Profanity includes "crap," "damn," "hell," "ass," "sucks." The commando toys make sexist comments about the female Barbie-esque dolls they bring to life. The overall themes, satirizing the military industrial complex, violent war-themed toys, and the negative influence of multinational corporations, make this best for tweens and teens capable of understanding the topics being satirized.

Flirtation and a passionate kiss. The commando toys make sexist comments about the female Barbie-esque dolls they bring to life.

Living toys are chewed up in a disposal and otherwise tortured. They use power tools and explosives to attack humans. Some peril: A boy risks falling to his death or dying from electrocution while on top of a pole with a power generator. Toys arm themselves with nail guns, staple guns, various explosives, and set fire to tennis balls shot from a tennis ball server.

This movie satirizes the military industrial complex, violent toys, and the pernicious influence of multinational corporations.

A mom asks her son, "Are you on crank?" then proceeds to ask if he is on other drugs. Parents drink from a glass of gin and tonic that is drugged with sleeping pills. A teen boy has a poster in his room of a band called "REO Speed Dealer."