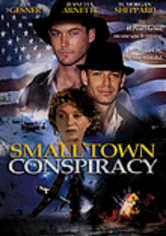 2003 NR 1h 31m DVD
Set in Florida at the close of 1941, this film noir follows small-town police chief John Haleran's (Zen Gesner) investigation of the murder of a young Japanese girl, a case that leads to a top secret government conspiracy. With the help of retired cop Taylor (William Morgan Sheppard), Haleran discovers a connection between the victim and an imminent Japanese attack.