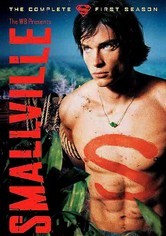 2001 NR 6 discs
A young Clark Kent (Tom Welling) struggles with normal adolescent issues -- along with figuring out just how to deal with the puzzling powers he now possesses and the oddly devilish goings-on in Smallville, the tiny Kansas town where he lives. Taking up most of his time, however, is his affection for the stunning Lana Lang (Kristin Kreuk). This six-disc set contains all 21 episodes from the first season of the television series.

Parents need to know that this superhero origin story series is frequently bloody and violent. While the program deals with a wide range of topics and good eventually overcomes evil, gory fight scenes and evil villains are commonplace. The show also contains some iffy vocab ("hell," "bastard"). As the characters have aged, sex and drama have been introduced to spice up story lines.

Contains some sexual content including scenes where nudity is implied (in one episode a murder victim -- a teenage girl -- waits for her date in the shower). Main teen characters decide to have sex.

Strong emphasis on family and friendship.

Early episodes feature high school parties that have included alcohol, and Lex Luthor drinks scotch. Occasionally characters reveal addiction problems. Clark's use of red kryptonite, which controls him and alters his behavior, is also akin to a drug addiction.