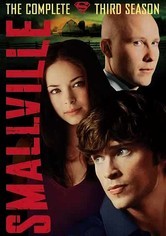 2003 NR 6 discs
Clark Kent (Tom Welling), Lana Lang (Kristin Kreuk), Lex Luthor (Michael Rosenbaum) and Chloe Sullivan (Allison Mack) are still livin' large in Smallville in the third season of the hit TV series, in which Clark picks up new powers like super hearing (but first he has to go deaf). As Clark continues to defy his biological father, his relationship with Lana fizzles. Meanwhile, Lex deals with a psychological breakdown.