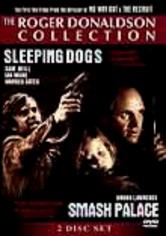 1982 NR 1h 40m DVD
Al Shaw is obsessed with two things: motor racing and a junkyard that he dubs the "Smash Palace." But his neglected wife isn't having any of it and begins an affair. When Al finds out about it, he retreats to the bush with his young daughter in tow. This video is part of a collection devoted to director Roger Donaldson's work. The other video features Donaldson's film Sleeping Dogs.