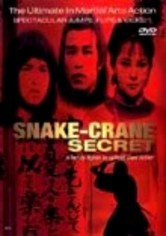 2000 NR 1h 33m DVD
Two decades ago, two young brothers (Fei Meng and Tao-Liang Tan) were separated when their father was killed by a rival kung fu master. Now the siblings have grown into formidable fighters, determined to avenge his death. As the brothers train in their family's snake-crane technique, they learn that their father died protecting a book that held the secret of that very fighting style -- and there are many who would kill them to get it.