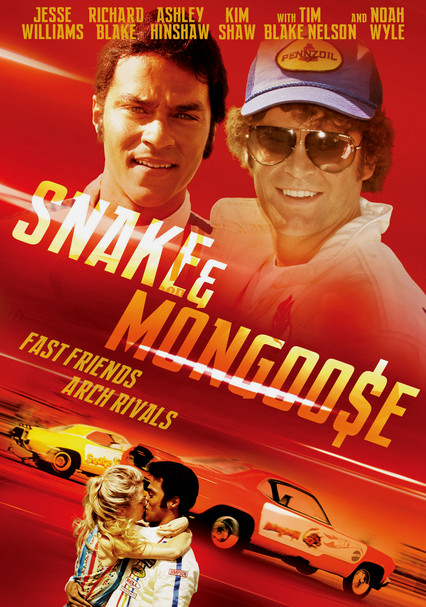 2013 PG-13 1h 42m Blu-ray / DVD
In the 1960s, drag racers Don "the Snake" Prudhomme and Tom "the Mongoose" McEwen were the biggest stars in a sport that was virtually unknown. It would take teamwork between these rivals and a canny corporate partner to put drag racing on the map.

Parents need to know that Snake & Mongoose is a 2013 movie chronicling the historical friendly rivalry between two of drag racing's best-known competitors, and how they helped make drag racing a more popular sport in the '60s and '70s. Characters are frequently shown smoking cigarettes and cigars and drinking beer. There are some moments of mild sexual innuendo, as Mongoose is frequently shown flirting with attractive women. There are also scenes in which Mongoose's son is shown dying from leukemia that might be difficult for more sensitive viewers. Sponsors, Mattel and Hot Wheels in particular, are frequently shown and appear on the uniforms and vehicles of the drag racers.

Some flirtation and innuendo as Mongoose is conveyed as a "ladies' man," often seen flirting with female drag racing fans. Early in the film, a man and a woman are shown making out.

There is some historical footage from actual drag races in which the vehicles spin out of control and burst into flames. Also, Mongoose's son is shown dying from leukemia.

This film shows the virtues of friendly competition and teamwork.

This movie, about drag racing's growing popularity in the '60s and '70s, is presented in part by the National Hot Rod Association. The drag racing vehicles and the uniforms of the racers are covered in sponsors ranging from Mattel, the U.S. Army, Coca-Cola, Olympia Beer, Ford, English Leather, Champion Spark Plugs, and Beechnut Gum. A fair amount of the movie is centered on Snake and Mongoose trying to secure sponsorship through Mattel, and having Mattel sell Hot Wheels car miniature versions of the drag racing vehicles they drive.