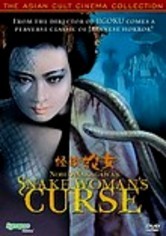 1968 NR 1h 25m DVD
When a wealthy landlord causes the death of a poor farmer, enslaves the man's wife and daughter, and then kills a snake the wife was protecting, he unleashes the serpent's curse. Before long, the landlord finds himself being driven mad by deathly spirits as terrible misfortune rains down on his family -- including his son, whose young bride starts growing scales and green skin in this film from Japanese horror auteur Nobuo Nakagawa.