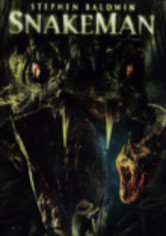 2005 R 1h 31m DVD
Drawn to a faraway island by the discovery of the corpse of a 300-year-old man, a group of scientists is convinced they'll find the source of everlasting life. But when their helicopter crash-lands in the Amazon jungle -- home to a deadly species of snake with a taste for human flesh -- their mission turns to avoiding almost certain death. Stephen Baldwin and Jayne Heitmeyer co-star in this sci-fi adventure directed by Allan A. Goldstein.