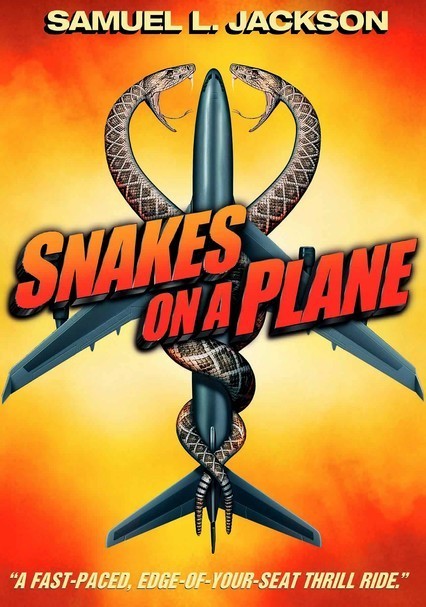 2006 R 1h 46m DVD
Tasked with transporting murder witness Sean Jones to Los Angeles, a badass FBI agent has to battle a horde of venomous snakes that were unleashed midflight to prevent Jones from taking the stand against the killer.

Parents need to know that the film isn't for kids. It features frequent jump scenes, with snakes falling or darting out of compartments or from under the camera frame. On-screen or implied deaths are frequent and bloody (man killed with baseball bat, shoot-out leaves bodies, many characters bitten by venomous snakes, producing swelling wounds and visible blood). A couple has sex in the bathroom (and also disable the smoke detector so they can smoke a joint), and are immediately killed by snakes. Infant and children are threatened by snakes; a little boy is bitten, producing gross wound from which a woman sucks the poison (leading to crude comment from observer, who also wants her to suck his hand). Characters chop and smash snakes. Characters use frequent bad language, especially "motherf----r."

The movie doesn't make any effort to convey positive messages; it's all about shocking viewers with over-the-top action and comedy.

A couple smokes a joint while having sex in bathroom; a woman drinks from a flask; a nervous flyer asks for a gin and tonic; hearing that the snakes are responding to pheromones sprayed in the plane, Flynn calls them "Snakes on crack."