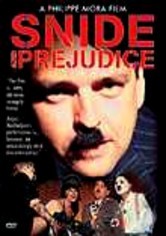 2001 NR 2h 0m DVD
This highly unorthodox black comedy from director Philippe Mora spins around a doctor attempting to cure the dementia of his patient (Angus MacFadyen) -- by forcing him to dress up as Adolf Hitler! Recruiting other patients to act as Hitler's henchmen (Joseph Goebbels, etc.) and even Eva Braun, the mad doctor concocts a scheme that has both disastrous and hilarious results.