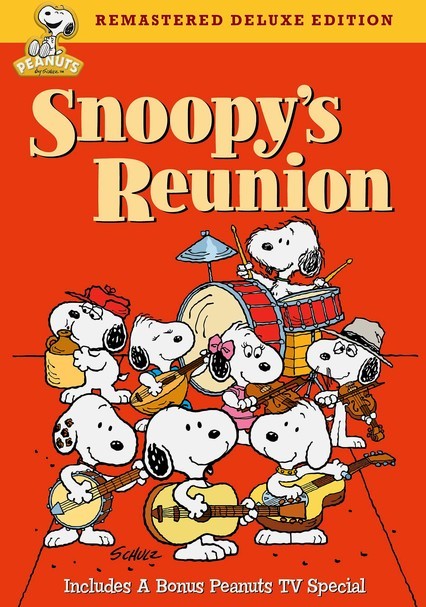 1991 NR 0h 50m DVD
Sensing that his canine companion is a bit down in the mouth, Charlie Brown organizes a Daisy Hill Puppy Farm reunion for Snoopy and his seven siblings in this animated special based on the Charles M. Schulz comic strip. While Charlie Brown is dismayed to see that the bucolic farm has disappeared in a sea of urban sprawl, Snoopy and gang are simply delighted to be in one another's company. Pulling out their instruments, they jam on the sidewalk.

Parents need to know that Snoopy's Reunion is a 1991 short feature, and it's paired here with It's Flashbeagle, Charlie Brown, a 1984 short feature. This addition to the Peanuts pantheon lacks the humor and humanity that make earlier specials so memorable. But there's nothing objectionable in the two stories included on the DVD, just lots of views of Snoopy's childhood and siblings, some good bluegrass music, and some wincingly dated '80s-era song and dance. The scene in Snoopy's Reunion in which Snoopy and his many siblings are separated from each other and their mother when their new owners come to pick them up shows the puppies shedding tears and might induce the same in younger or move sensitive viewers.

Snoopy and his far-flung littermates share a connection strong enough to make them travel miles to reunite at the Daisy Hill Puppy Farm. The bond between a boy and his dog is shown when Charlie Brown wishes he had a puppy to come home to after losing yet another baseball game.

The second feature, It's Flashbeagle, Charlie Brown, is a reference to the hit 1980s movie Flashdance. In addition to the animated feature and comic strip, Peanuts characters are used in a wide array of merchandise, from toys and clothing to school supplies.