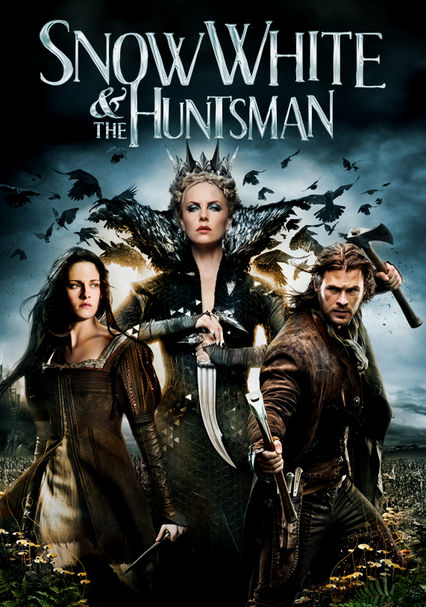 2012 PG-13 2h 7m Blu-ray / DVD
An updated take on the Snow White tale finds the fair-skinned maiden battling the Evil Queen with skills learned from the huntsman sent to kill her. Meanwhile, a love-struck prince bides his time from afar.

Parents need to know that Snow White and the Huntsman isn't the sweet and colorful fairy tale that's depicted in other adaptations: This is a very dark, violent, moody story with a lot of death and mature themes. Charlize Theron's queen is more than evil; she's sadistic and vain and will kill or torture anyone in order to keep her magically eternal youth and beauty (a scene in which she plucks a bloody bird's heart out of its body and eats is particularly gruesome). The body count is quite high -- usually in hand-to-hand battles -- as is the number of people the queen magically robs of their youth (or life). Although there are a couple of kisses, this Snow White (played by Twilight's Kristen Stewart) isn't preoccupied with romance but rather with saving a kingdom from its tyrannical ruler.

The queen exudes sexuality in nearly every scene. She wears form-fitting gowns and is shown nude descending into a milk bath; her naked lower back is on display several times. The wedding night between the queen and the king isn't graphic, but he's on top of her in bed, kissing and caressing her (until things take a violent turn). Snow White gets a couple of kisses.

This is a dark and violent story with a high body count. The queen kills scores of people and tortures others by literally sucking their youth out of them so she can magically remain young. She eats birds' hearts (the scene in which she plucks a bloody bird's heart out of its body is a particularly gruesome moment) and can kill in many different ways -- without ever spilling blood. There are battles between phantom armies and the king's army, and then Ravenna's army defeats the king's army and is said to have murdered everyone left in the castle. The queen's creepy brother admits that he has stared at Snow White and then basically attempts to rape her (he gets on top of her forcefully, but she injures him and escapes). Various groups of the Queen's army fight Snow White, the huntsman, and the duke with axes, swords, and arrows. The dark forest is full of frightening creatures that can poison or maim.

Most of the movie is clouded in the queen's evil thirst for eternal youth, but there are some inspiring messages about true beauty being of the heart, as exemplified by Snow White. Snow White's loving nature is what makes her unique; she doesn't know how to lead at first, but she knows how to open her heart and care for others, and for that she's beloved as a princess and eventually a queen. Obviously the queen's nefarious plans for domination are a cautionary tale about beauty being a woman's only power, but she does pose interesting questions about how men have historically dominated women and used them for their desires.

Adult characters drink, and a couple of them get drunk (the huntsman in particular is known as a big drinker). The dwarfs all have a few too many, and then one makes a joke about feeling "lovely" because of the "mushrooms" in a fairy forest.