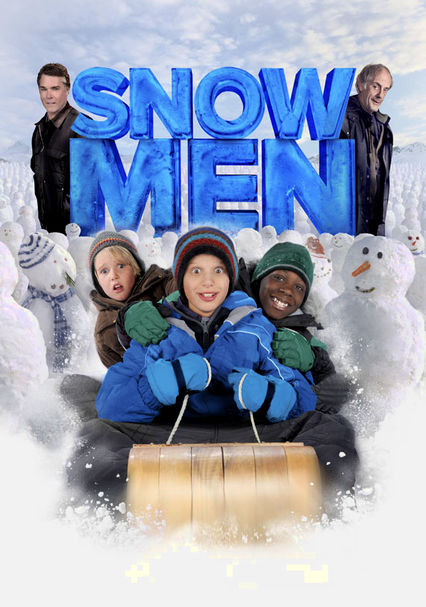 2011 PG 1h 26m DVD
In this family-friendly drama, a surprising discovery in the snow catapults three small-town boys into the spotlight. Soon the pals hatch a plan to be remembered forever by setting a world record for building snowmen.

Parents need to know that Snowmen is a 2011 coming-of-age movie about a boy with terminal cancer who rallies his school and community to try to set the Guinness World Record for the most number of snowmen made in 24 hours. There are scenes showing frequent bullying, as the bully pushes, shoves, and name-calls his way through each of his scenes, but it's worth mentioning that the lead character develops a strong sense of empathy during the movie and begins to understand that the bully is a bully because he has no real friends and doesn't know how else to behave. There are instances of inappropriate humor: Two boys who become friends start a snowball fight culminating in one tackling the other, holding him down, and forcing snot bubbles out of his nose until they almost drip in the other boy's face. Friends are nearly buried to death under snow by a bulldozer; this same bulldozer uncovers the body of a deceased elderly man who stares these boys directly in the face. However, in spite of these moments of bullying, violence, and inappropriate humor, this movie does teach lessons on the importance of empathy, honesty, and overcoming obstacles to achieve one's dreams.

A boy makes a snowman with breasts, points, and says, "I made a snowwoman!"

Frequent bullying. A boy with terminal cancer who always wears a winter hat to cover up his lack of hair from chemotherapy is forced to remove his hat by a bully and his minions. This same bully violently shoves a boy down the top of a large mound of snow in a parking lot. The bully is hit in the nose with a snowball and is shown with a bloodied nose. Three boys are nearly trapped under snow when a bulldozer dumps snow on top of them. After they escape this near-disaster, the body of a recently deceased old man emerges from the snow and stares them in the face. A boy falls into thin ice and is shown appearing to be dead under the water.

Frequent name-calling from a bully. A boy named Lucas is called "Puke-as" and "Mucous." This bully also says "turd" and "screw you." A boy tells this bully to "piss off." One boy says he has to "take a leak." During a rousing speech intended to inspire the entire school, a boy talks about the future, when "you're so old, you can't even get out of bed to poop."

Through the actions of the characters, this movie teaches lessons on empathy, overcoming difficulties, and the importance of friendship.