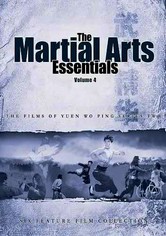 1977 NR 3h 1m DVD
Noble heroes collide with formidable foes in this pairing of kung fu action classics, one dramatic and one comic. In Snuff Bottle Connection (1977), John Liu is an honorable court official tasked with finding an infamous snuff bottle that links the traitorous Manchus to their Russian allies. Then, in Shaolin Drunkard (1983), the Yuen clan delivers the goods with magical creatures, over-the-top effects -- and plenty of camp.