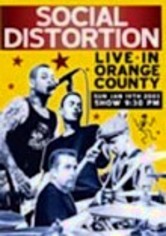 2004 NR 1h 0m DVD
Punkers Social Distortion exploded onto the scene in the early 1980s with a gimmick that no other band could boast -- country and Western music! But when singer Mike Ness and his mates took to the stage, skeptics were silenced, and audiences were soon multiplying in size as the group rocked out (with a twang) at live shows across the country. This concert was recorded in Orange County in January 2003.