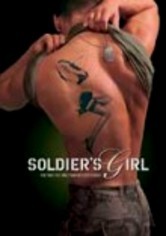 2003 R 1h 52m DVD
This powerful drama tells the true story of a young soldier, Pfc. Barry Winchell (Troy Garity), who meets and falls for a beautiful transgendered nightclub performer (Lee Pace) while on a drunken outing with fellow soldiers. Winchell's relationship is frowned upon by the other soldiers -- and eventually leads to tragedy at the hands of his homophobic roommate. Garity and Pace both earned Independent Spirit nods for their performances.