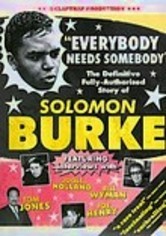 2007 NR 1h 25m DVD
This definitive documentary traces the history of Solomon Burke, whose talent and guts took him from modest beginnings in Philadelphia to the pinnacle of success in the music industry: a Grammy Award (for the album "Don't Give Up on Me"). Burke -- deeply rooted in the gospel tradition and known as the King of Soul -- discusses his family and his spirituality and performs several gospel selections.