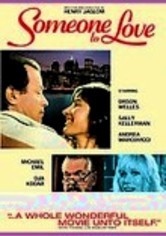 1988 R 1h 51m DVD
Unconventional independent filmmaker Henry Jaglom explores the elusive nature of love in this moving comedy. Director Danny Sapir (played by Jaglom) invites friends and acquaintances who would otherwise be alone to a Valentine's Day party. Circulating among his guests, he asks them for their opinions on relationships, success and loneliness. Sally Kellerman, Andrea Marcovicci, Michael Emil and Orson Welles (in his last film appearance) co-star.