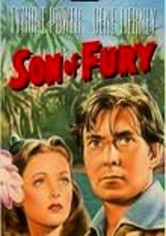 1942 NR 1h 38m DVD
The illegitimate son of a British nobleman, Benjamin Blake (Tyrone Power) is forced to serve a cruel uncle determined to keep Benjamin's inheritance. But the young man escapes his uncle and makes his fortune on a Polynesian island, where he falls in love. Later, he returns to England to claim his birthright. Gene Tierney, George Sanders, Frances Farmer, John Carradine and Roddy McDowall star in this romance adventure directed by John Cromwell.