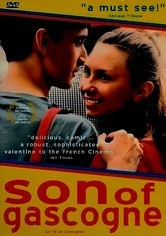 1995 NR 1h 46m DVD
In this romantic comedy, lanky tour guide Harvey (Gregoire Colin) is told by a stranger that he strongly resembles legendary 1960s French new wave filmmaker Gascogne; before long, he's assumed to be Gascogne's son. Harvey quickly becomes the toast of Paris, hobnobbing with directors and Gascogne groupies. But his newfound "fame" may derail his relationship with Dinara (Dinara Droukarova), the film-buff interpreter on the tour.