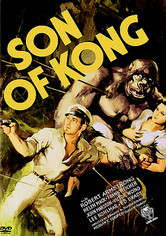 1933 NR 1h 9m DVD
In the wake of a large-scale disaster that saw the colossal King Kong scaling the Empire State Building and clutching a terrified blonde, beleaguered adventurer Carl Denham (Robert Armstrong) boards a ship to the remote island where he first captured the enormous ape. But when a mutinous outbreak strands him and a few companions with a baby gorilla of gargantuan proportions, they befriend the gentle giant -- and gain a new pet.