Song of the Gringo 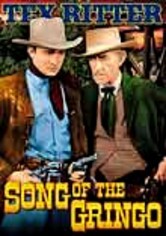 Song of the Gringo

1936 NR 1h 2m DVD
Going undercover to bring down a clan of claim jumpers, a lawman has to mix with the wrong crowd. But in between shoot-outs and kidnappings, he still finds time for a little song and dance. Featuring the tunes "My Sweet Chiquita," "You Are Reality" and "Out on the Lone Prairie," this 1930s musical marked the screen debut of Tex Ritter, a former Broadway and radio singer who went on to father a son named John ("Three's Company").