Sonic Revolution: A Celebration of the MC5 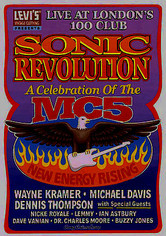 Sonic Revolution: A Celebration of the MC5

2003 NR 0h 56m DVD
Detroit's iconic rock group The MC5 is celebrated in this raucous London concert featuring other musicians and artists who join the band's remaining members onstage for an unforgettable show. The guest list boasts such rock luminaries as The Hydromatics' Nicke Royale, The Cult's Ian Astbury, The Damned's Dave Vanian, Meg and Jack of The White Stripes, Primal Scream, Death in Vegas, Dollhouse, The Go and more.