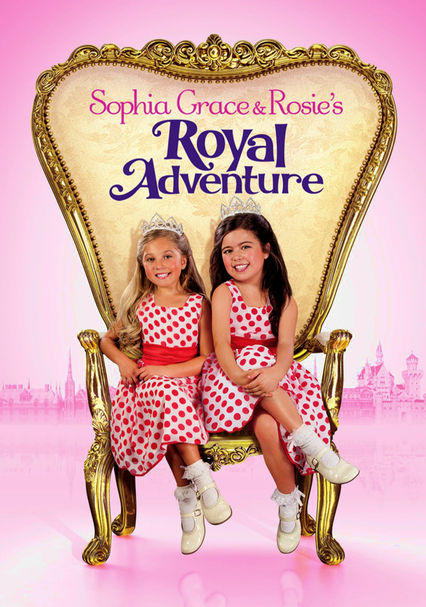 2014 NR 1h 10m DVD
Get ready for another British invasion! The super-cute, talented twosome of Sophia Grace and Rosie became an Internet sensation with their remarkable viral videos. The girls are sent to Switzelvania as correspondents to cover the coronation of a new queen.

Parents need to know that Sophia Grace & Rosie's Royal Adventure is a direct-to-DVD musical movie starring two young English cousins -- Sophia Grace Brownlee and Rosie McClelland -- who found fame on YouTube with their song-and-dance cover of a Nicki Minaj rap song. They then became a beloved part of the Ellen DeGeneres Show, assigned to their own segment entitled "Tea Time with Sophia Grace & Rosie." They sing; they dance; they're precocious. This, their first movie, keeps them in character as princess-obsessed little girls acting as correspondents for Ellen's show. It's a fairy tale adventure, set in "Switzelvania," with lots of cartoon action: pratfalls, the girls maneuvering across a ledge, chases, brawls, spills, and clownish thrills. Nothing is ever truly dangerous or scary. The villains are mean sisters and a calculating butler. Occasionally, Sophia Grace and Rosie break the rules (sneaking into a castle, pretending they're princesses from another kingdom), but it's all for a good cause, and they never misbehave for very long.

Comic pratfalls frequently upend the villains. Characters -- including the kids -- fall, brawl, make their way across a narrow ledge, chase one another, get thrown into a dungeon (complete with rodents), spill food, experience airplane turbulence, and get involved in lots of clownish predicaments. No injuries; nothing is to be taken seriously.

Be true to yourself. Believe in your own talents and gifts..

In the story, the two young heroines work for the Ellen DeGeneres Show. Another character is identified as one of the show's "segment producers."

A particularly vain princess has an injection to puff up her lips.