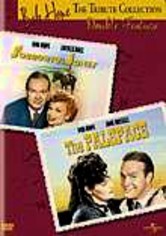 1948 NR 2h 59m DVD
Another hilarious Bob Hope duo. Sorrowful Jones (Hope) is a small-time New York bookie who reluctantly accepts a 5-year-old girl as collateral on a $20 bet. But when her father skips out, Jones winds up with more than he bargained for. Hope also stars in the Wild West spoof The Paleface as meek frontier dentist Peter Potter, who finds himself gunslinging alongside the fearless Calamity Jane (Jane Russell) as she fights off outlaws and Indians.