Soul in the Hole 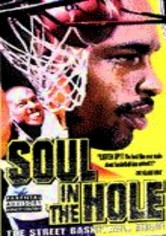 Soul in the Hole

1997 NR 1h 37m DVD
Documentary filmmaker Danielle Gardner examines New York street basketball and its powerful place in African-American communities. The film focuses on the Brooklyn champion Ed "Booger" Smith and one season with his team, The Kenny Kings, and the hotheaded man who coaches them, Kenny Jones. The Bedford-Stuyvesant hoopsters' relationships with each other, the community and their coach add up to much more than a simple sports documentary.