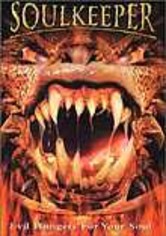 2001 R 1h 46m DVD
When two small-time thieves steal a powerful ancient relic, they inadvertently unleash a satanic demon lord with a habit of preying on the lost souls of mortals. Now, with the help of a strange dark angel, the thieves wage a bloody war with savage monsters of the underworld. This thrilling action-horror from writer/director Darin Ferriola stars Brad Dourif, Rodney Rowland, Kevin Patrick Walls, "Tiny" Lister Jr. -- and Debbie Gibson, as herself.