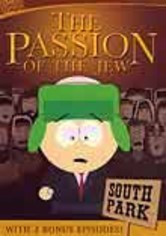 2004 NR 1h 6m DVD
Inspired by Mel Gibson's The Passion of the Christ (and tired of Cartman's Jewish jokes), Kyle renounces Judaism and rallies a group to carry out the movie's mission. Stan and Kenny have a different reaction to the film: They want their money back.

Parents need to know that the show South Park is not intended for younger viewers. The satire involved requires some perspective on kids' parts. Despite the cartoon format and the youth of the main characters, the issues and humor in each episode are geared toward more mature audiences who won't be tempted to imitate anything they hear on the show. Characters curse frequently, although the extreme language is bleeped. Graphic insults and discussions that take place are also not appropriate for younger viewers. There is not much on-screen violence, but there are some creepy scenes where a young character spearheads an anti-Semitic agenda. The social issues, centering on ethnic intolerance and hate mongering, are also not suggested for younger viewers.

Foul language is bleeped out but easily identifed.

The episode openly critiques Mel Gibson and the film Passion of the Christ.