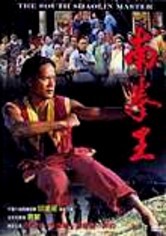 1984 NR 1h 33m DVD
In this spectacular martial arts epic set in the 19th century, a Ming patriot hides away with an opera group to escape evil Manchu warlords. While hiding out, he learns the Shaolin Knee Strike kicking and fighting methods so that he may assist the rebels in defeating the corrupt, evil Ching Dynasty tyrants when the time comes. Filmed on location in China and filled with jaw-dropping fight sequences!