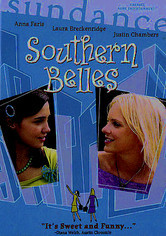 2005 R 1h 30m DVD
Georgia peaches Belle (Anna Faris) and Bell (Laura Breckenridge) long to break free of their small-town lives and head to the big city of Atlanta in this warmhearted comedy. But they face numerous obstacles, including Bell's rap-loving hayseed boyfriend. Just when they're getting close to scraping up enough money to make the move, another roadblock arises -- Bell falls for a handsome local cop named ... Rhett Butler (Justin Chambers).