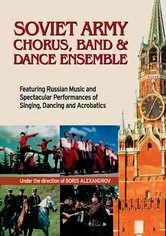 2008 NR 1h 11m DVD
In a Russian equivalent of the USO, the Soviet Army Chorus, Band and Dance Ensemble traveled the front lines during World War II, entertaining the troops with 200 dancers, acrobats and musicians. This rare filmed performance features the troupe in one of the 1,500 appearances they made during the war, bringing traditional Russian music and spectacular tumbling and dance to the stage.