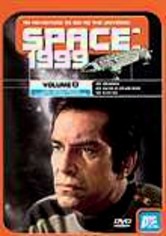 1975 NR 15 discs
When Earth's moon is blasted out of orbit by a series of lunar nuclear waste dump explosions, the greatest adventure mankind has ever known begins for 311 men and women on Moonbase Alpha. With return to Earth impossible, the astronauts (Martin Landau, Barbara Bain, Barry Morse and others) are headed for the outer limits of space, fighting for survival amid bizarre life forms, unfathomed civilizations, hostile environments and mystic phenomena.