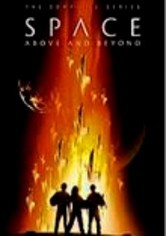 1995 NR 5 discs
It's 2063, and the people of Earth are battling aliens determined to annihilate humankind. Led by Lt. Nathan West (Morgan Weisser) and Lt. Cooper Hawkes (Rodney Rowland), the inexperienced 58th Squadron finds itself on the front lines of an intergalactic war unlike any other. Created by "The X Files" producers Glen Morgan and James Wong, this gritty sci-fi series earned a loyal cult following in its first and only season.