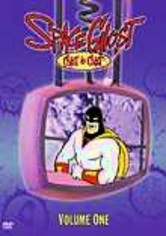 1994 NR 2 discs
Former 1960s cult superhero Space Ghost (George Lowe) has a new role. Trading in his Phantom Cruiser for a desk, he's the host of a most unusual talk show in this popular Cartoon Network "Adult Swim" series. His superpowers may no longer be needed for crime fighting, but his humor still packs a wallop as he interviews "real" celebrities such as Bobcat Goldthwait, Kevin Meany and Danny Bonaduce.

Parents need to know that this cartoon -- which was inspired by a much-more-innocent 1970s Hanna-Barbera show -- is meant for a mature audience. It includes edgy jokes about the overweight, people with mental illness, sex, criminal activity, radiation and cancer, drinking and drugs, and a host of other titillating subjects. Episodes often involve violence, such as when a monster attacks the compound and kills most of the crew. Most of the violence is off screen, but descriptions of blood and gore are vivid.

Some references to sex and sexual issues, like virginity.

Characters are nasty to each other. Violence is used to solve conflict.

Occasional references to alcohol use. Some characters deal with drinking problems.