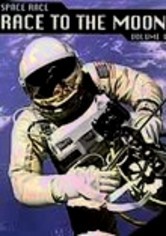 2007 NR 3h 27m DVD
This first installment in a two-part series chronicling the space race between the Soviet Union and the United States covers NASA's response to &NFiSputnik&NFi_;, the missteps and achievements of the Mercury, Gemini and Apollo programs, and the resulting years of lunar exploration. Featuring official NASA archives and breathtaking footage, this documentary series covers more than 25 years in the history of space exploration.