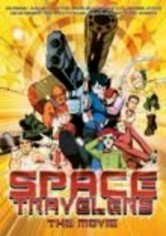 2000 NR 1h 0m DVD
In this anime adventure set in a futuristic world -- the New Cosmic Century 038, to be exact -- the alien Orbital Ring System makes a play for Earth by cutting off access to the Earth Civilization Sphere's intergalactic colonies. But if mercenary pilot Hayabusa Jetter and his motley crew of Space Travelers can get through the ORS barrier and procure precious supplies for earthlings, the planet's underground resistance may have a fighting chance.