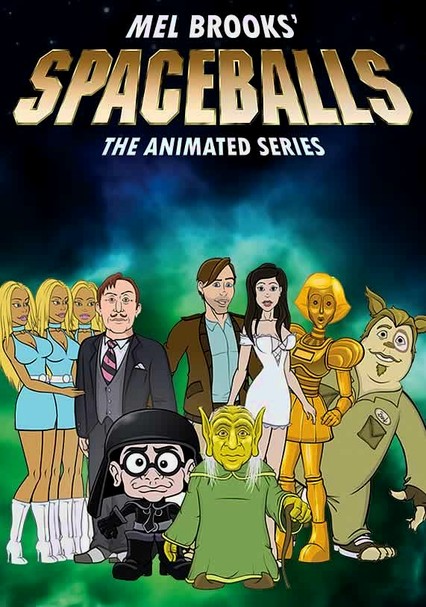 2008 TV-PG 1 season
Based on Mel Brooks's 1987 send-up of Star Wars, this animated series spoofs Harry Potter and other recent pop culture hits via the galactic misadventures of Princess Vespa and Lone Starr, who battle the villainous Dark Helmet and President Skroob.

Mel Brooks's classic space spoof, Spaceballs, gets a new lease on life in this animated series, with Brooks voicing two of the characters he played in the original film: the philandering President Skroob and the all-powerful Yogurt.

Parents need to know that -- just like the live-action movie it's based on -- this animated parody of the Star Wars franchise can be rude, crude, and risqué. Some episodes also have a fair amount of cartoon blood and gore. Much like many other Mel Brooks creations, the series mines laughter from innuendo and characters who skate close to the edge of being offensive. It's clever, and the frequent references to pop culture icons will entertain fans, but some people might think some of the jokes go too far.

Some innuendo, and characters occasionally kiss. Many female characters wear very revealing outfits; some are quite voluptuous (and Princess Vespa's chest -- while always covered -- bounces around rather frequently).

Quite a lot of animated violence involving swords, fists, blasters, guns, tanks, and many other weapons. A fair amount of puposely over-the-top cartoon blood and gore (including heads getting torn off and people being flattened by tanks) in epsiodes that spoof things like Grand Theft Auto.

The evil President Skroob and his nefarious henchman, Dark Helmut, are bent on conquering the universe, and only Lone Starr and his allies can foil their dastardly schemes.

The series frequently references other pop culture icons, especially popular films and classic sci-fi stories. In fact, this entire show is an homage/parody of the Star Wars franchise; most of the main characters (as well as their costumes, names, and recurring lines) are lifted straight from the original trilogy of Star Wars films.